I am working on my latest book, hoping to have it available before Christmas. It is set on a small island off the Newfoundland coast, and is about a young boy who faces some daunting struggles when he loses his father. His life takes a downward turn, but he is eventually pulled back with the help of family, friends, and a new person in his life, a Mountie.

The idea came from a dear friend who spent some time on Ramea island several years ago with her husband. They thought it would be a wonderful spot for a book to be set, and I agree. Fortunately with the internet these days, I can 'visit' the island without having to go there, although I would love to if time and finances permitted.

This is the working cover and title I have developed, and they are both subject to change before the book is finally published. But be on the lookout for it in the coming months! 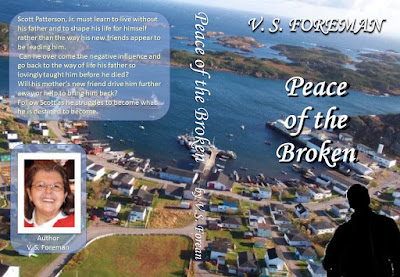 Posted by Unknown at 2:06 PM No comments:

Eighteen authors from all around our area here in Springfield, Ohio participated in the Local Author's Fair last Saturday. The morning began with a talk from Vick Mikunas, a radio personality who has interviewed numerous authors throughout his career. His talk was fun and enlightening.

It never ceases to amaze me how many talented authors we have in just our area alone. It is always interesting to meet the new ones and the familiar ones from previous events. If you have never attended one of these events, make it a priority to go at your next convenience. The authors have their books for sale, usually at a discount, and you can pick up information on how they got started, and how they got published, just to mention a few things.

Good news! Especially if you live in the Springfield area! There will be another author event in August of this year! I will post more info as the time draws nearer. This one should be even bigger and better.

Below I will post photos of the authors who attended this latest fair. On my Facebook page I posted contact info and names on each individual photo. Enjoy! 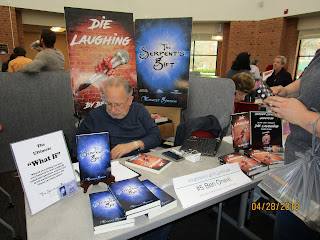 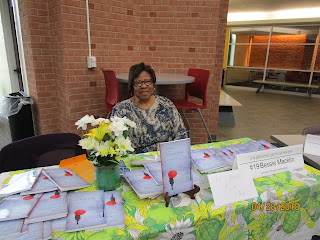 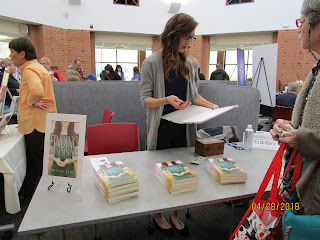 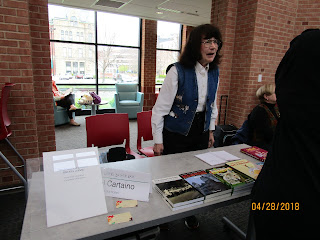 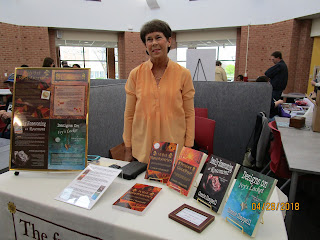 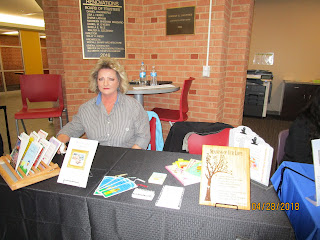 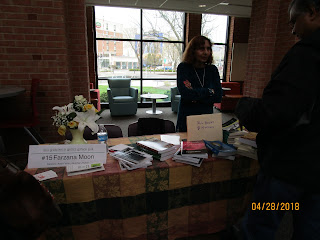 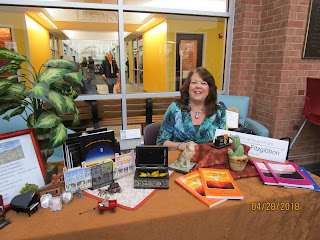 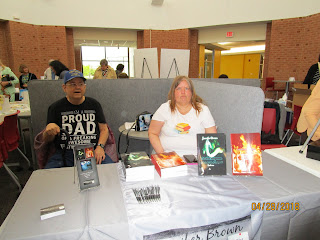 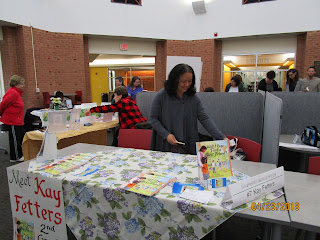 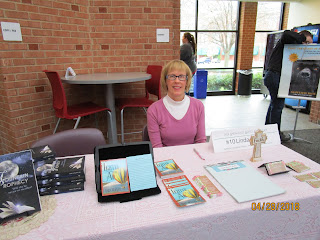 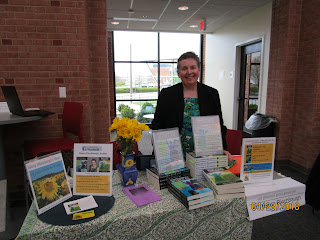 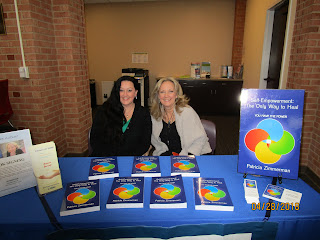 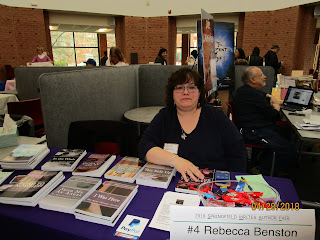 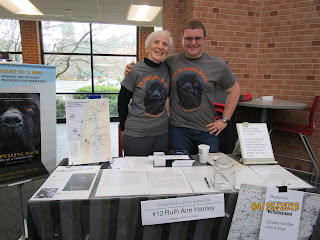 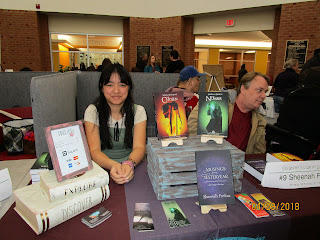 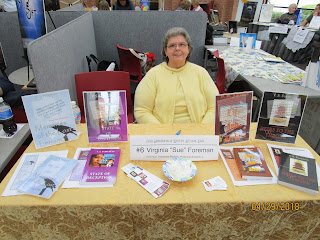 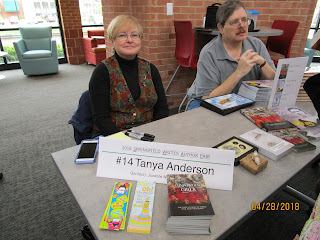 Posted by Unknown at 4:42 PM No comments:

The annual Local Author Fair held at the Clark County Public Library in Springfield, Ohio is to be held on Saturday, April 28, 2018 from 12-2 p.m.

It is a gathering of authors from only Clark County this year. There should be plenty of information to gather, authors to meet, books to buy and have signed and fun for all.

I will post some photos of the event as soon as I can. Stay tuned! 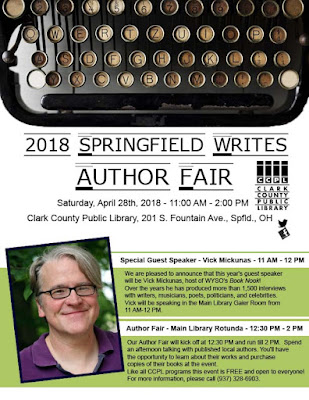 Posted by Unknown at 2:14 PM No comments:

It has been a long while since I found time to update this blog!! Sorry if you missed me. But I have finally released my newest book. I hope you will check it out on Amazon.com and please leave a comment when you have read it.

This one is another one that I started many years ago after reading a news article about an odd little ritual that happens in Baltimore, Maryland on the anniversary of Edgar Allan Poe's birthday. At that time there was a man who visited the original site of Poe's grave and at the hour when January 18th became the 19th he would drink a toast then leave the remains of the bottle of cognac and three roses by the marker. No one knew who he was or why he did this, but every year since the mid 1940s he had done it until he finally stopped coming in 2010.

The article fascinated me, and I began working on a story then. But life happens, and things get pushed back, and it was not until a young friend expressed interest in my book that I finally got it together and finished the book.

It is all a total creation of my imagination, but the facts about Poe contained within the story are true. I did a lot of research on Poe in the course of writing the book and learned a lot about him that I never knew even from all my literature courses over the years--and I liked his works even before I knew all that!

I hope you enjoy the book and will let me know what you think! 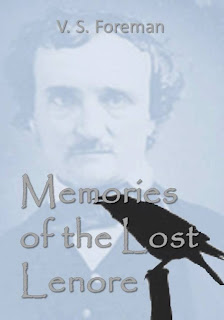 About the Book
For readers who like a little romance with a little mystery along the way, this is a good read with no objectionable language, subject matter or violence.

Lennie Allen works up courage to end her constricting engagement to a wealthy man in favor of pursuing her teaching career. While attending a Poe Festival in Baltimore, Maryland she meets two interesting locals.

Jason owns an old book store, is handsome and friendly, willing to share all he knows about local history and traditions. His friend Mac is quaint, and wants to be a writer using the style of Edgar Allan Poe. While there, Lennie witnesses firsthand the odd ritual that takes place in the Westminster Burying Ground on the anniversary of Poe’s birth every year.

What does this ritual have to do with her new friends, and can she help them set things straight when they go uncomfortably wrong?

Things finish with a satisfactory end after some twists that keep you guessing.

Posted by Unknown at 2:07 PM No comments:

ONLY 9 DAYS LEFT to take advantage of the HUGE sale at Smashwords.com ! If you haven't snagged one or more of my books, now is the time. My books are offered at 75% off. There are many other books offered at 25%, 50% , 75% and Free. Have a look today at one of the following links: https://www.smashwords.com/profile/view/SueForeman. or this one for the full catalog of sale items: https://www.smashwords.com/books/category/1/newest/1

THERE IS STILL TIME TO TAKE ADVANTAGE OF THE SALE

I have also been working on my next book. I hope to have it ready for publication before the end of this year. Keep watching for further announcements of that.

Haven't read any of my books yet? Now is the time to check them out! Smashwords (an online book vendor) is having a huge sale. All three of my books are being offered at a 75% discount for the month of July.

Just go the this link (https://www.smashwords.com/profile/view/SueForeman) to view my profile and purchase any or all of my books now. And don't forget to leave me a note telling me what you think of them when you have read them.

You can also see a catalog of other books offered for sale at the following link too. (https://www.smashwords.com/books/category/1/newest/1)

Share this news with your friends and happy reading!

Memories of the Lost Lenore 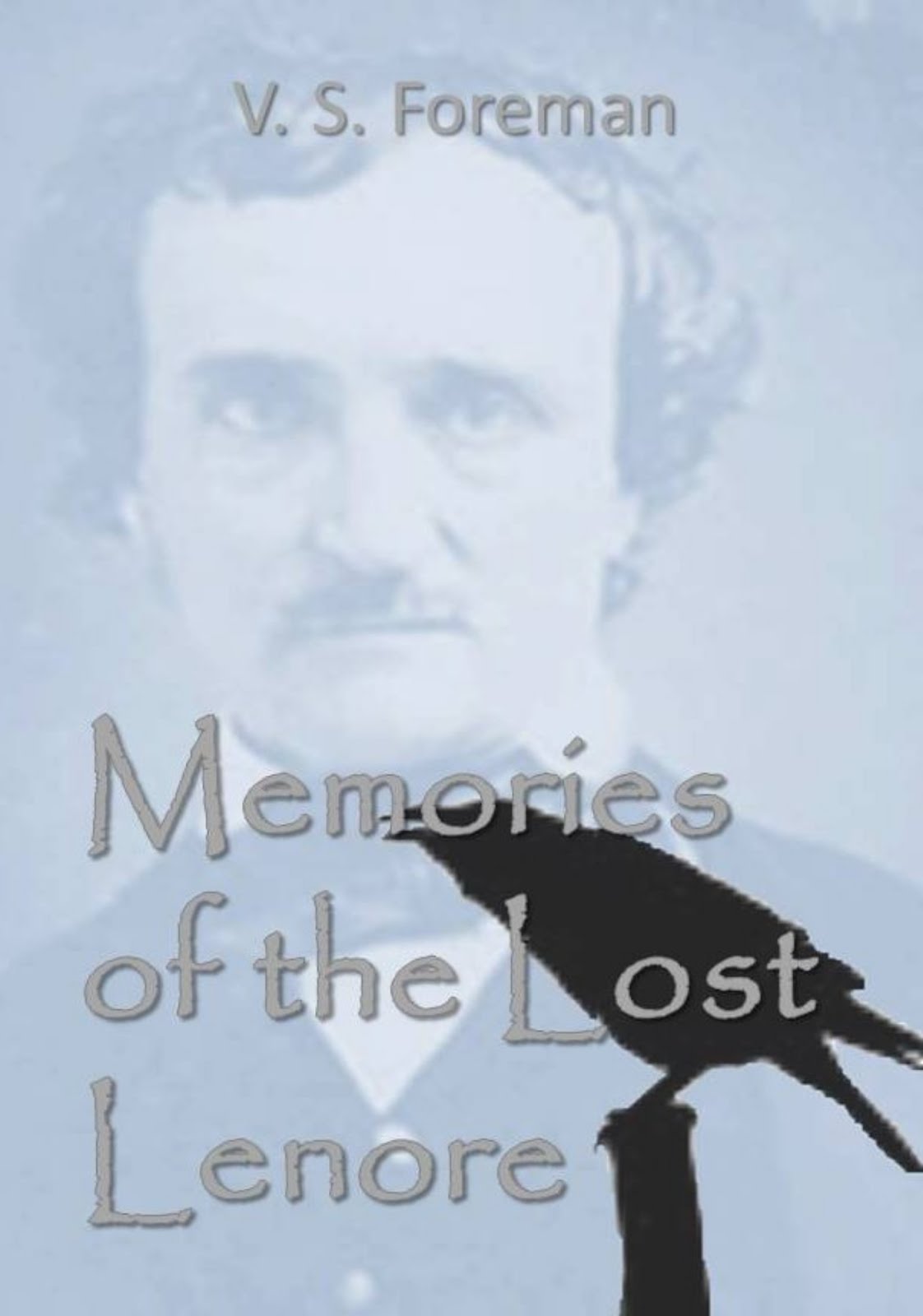 Heirs to the Throne 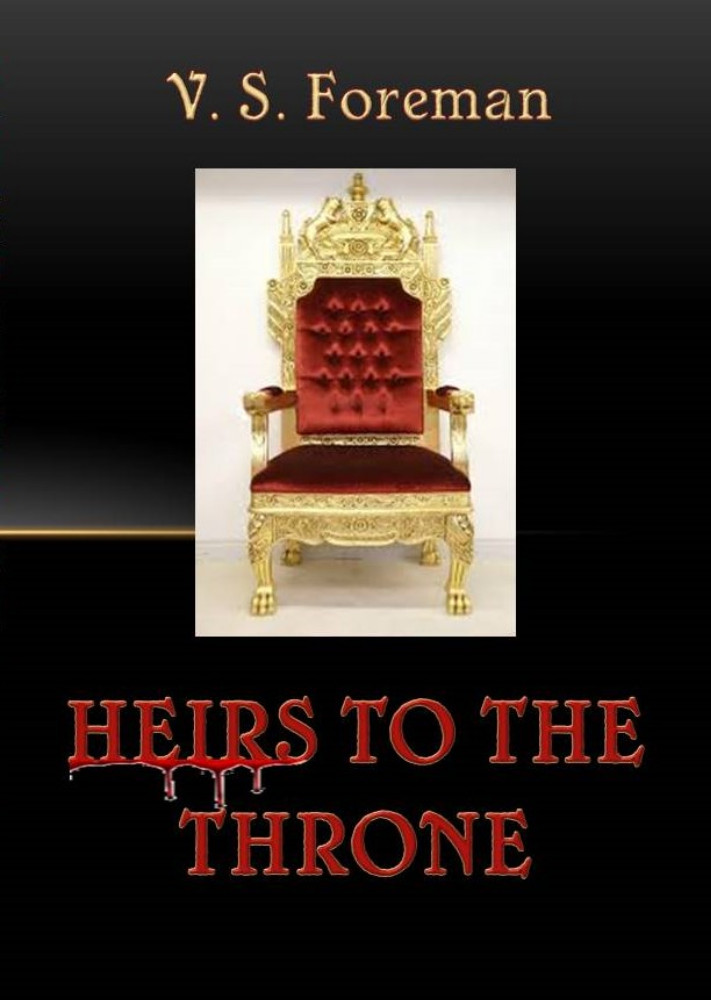 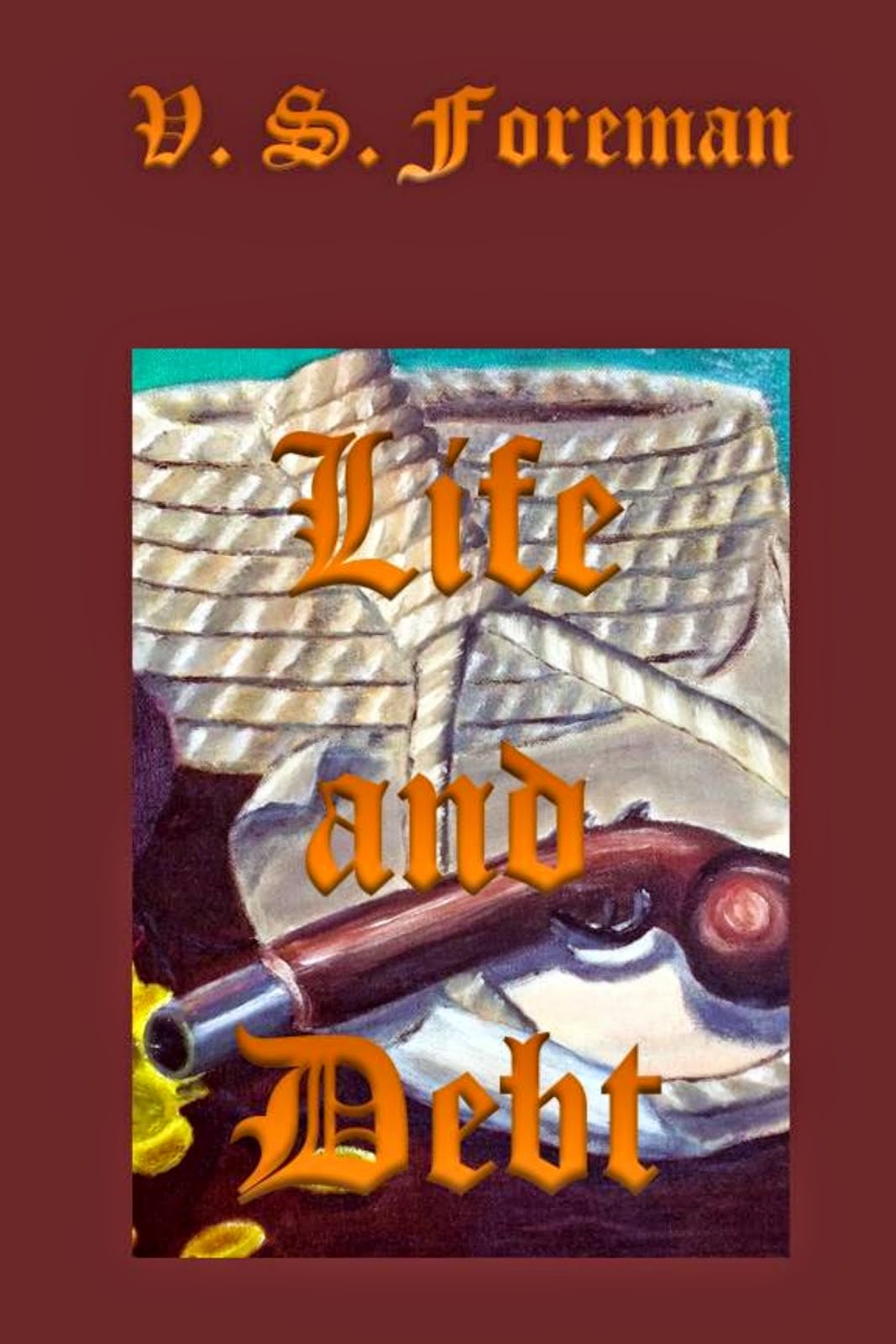 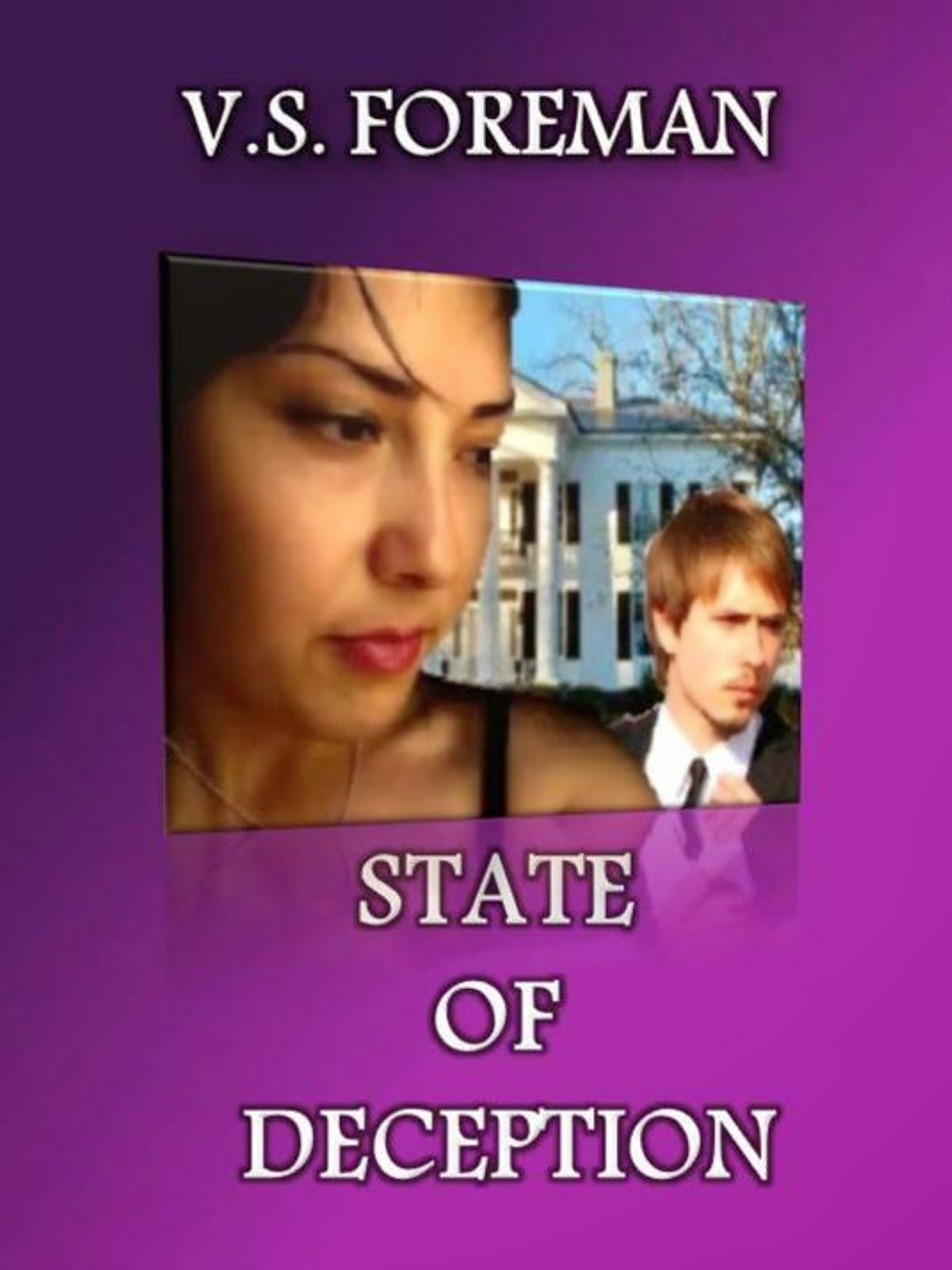 To leave a comment, click on the word 'comments' at the end of the blog post. A box will open up for you to write your thoughts! Thanks,
Sue